When you need to carve up an expensive resource (such as an active fiber route) into pieces, multiplexing is the way to go. What is multiplexing, you may ask? It's the process by which multiple signals are combined into a single signal, then split back into pieces upon arrival.

The easiest way to think about this is in terms of light. At one end of a  fiber optic cable you have a lens that takes many colors of light and combines them into high energy white light. That white light is sent to a prism at the other end of the fiber which splits the white light back up into it's constituent colors. If the red light at the beginning of the fiber blinks in a certain pattern, the red light at the far end will also blink without interfering with the other colors (wavelengths.)

WDM (wave-division multiplexing) is further broken down into two flavors, CWDM or Coarse WDM and DWDM or Dense WDM. In Coarse WDM fewer signals are combined onto the fiber and they are spaced farther apart. In DWDM more signals can be combined resulting in increased hardware and system design complexity and higher costs. Depending on the system needs CWDM and DWDM are both viable options.

I hope that helps explain why multiplexing is such an important part of fiber optic communications!
Posted by Tantilloon at 3:29 PM No comments:

CWDM is trending hot right now and we've got a whole new suite of instruments available for all your testing needs. 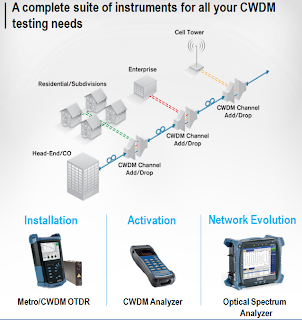 Want to future proof your CATV broadband and hybrid networks? Try the FTB-5240S Optical Spectrum Analyzer. It's a highly accurate OSA and is ideal for multiservice operators and CATV operators.


Want to achieve end-to-end characterization by testing through CWDM-based multiplexers and demultiplexers at ITU-recommended wavelengths?

Are you looking for an innovative, low-cost alternative for activation and troubleshooting of a CWDM network?

Look no further than the new EXFO FOT-5200 CWDM Analyzer! This small handheld devive packs in all the essential features including:


It's the fastest and smallest CWDM tester on the market and we've got it!

Interested in a quote? Drop us a line at sales@fiberoptic.com!
Posted by Tantilloon at 3:24 PM No comments: